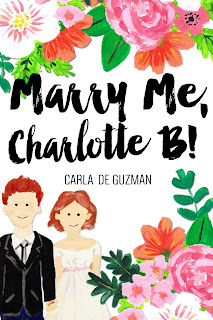 Synopsis: Charlotte Bertram is the star of Marry Me, Charlotte B! A reality show that follows her as she plans the biggest weddings of the year. Together with her assistant, Nellie Canlas and her son, Robert Bertram, see how she handles crazy client requests, bridezillas and more!

Based on the title, I thought the book's main character would be Charlotte, the middle-aged woman who ran the company that planned weddings. But it only took a while for me to get that the book title was also the title of the reality TV show, and that its real star was Charlotte's unassuming, frumpish assistant.

I work in TV so I was pleasantly surprised that the story opened with terms I was familiar with--Zoom-Ins and Close-Ups and Cut-TOs. I felt like I was really watching a reality show, being introduced to characters in which at first, I wasn't emotionally invested. But scene after scene, I started to care. When was Nellie going to wise up? Did Robert really care--or is he just a really sweet guy?

But I think the clincher for me was how the story was written. The author's a wordsmith. I loved how she described places and scenery, and sweet moments matter-of-factly; no need to go overboard with the racing heartbeats and swoony glances. Everything unfolded in the right time, in the right way. In fact, the plot was so natural, it felt like real life--or a really good reality show.

Get it on Amazon or for free on Smashwords.
Posted by Agay Llanera at 12:59 AM