For the first time since I started this novella-writing thing, I am releasing two e-books this year. The second one will be out in December because I really, really want to make this two-novellas-a-year a regular goal (fingers crossed).

I already started this book a year ago, but I had to put it on hold because I went through some stuff. And by the time I bounced back from said stuff, I started a new one instead--the YA book, Choco Chip Hips, which reflected where I was at that point in my life.

But after releasing CCH, I wanted to finish the other one as well, because I knew that if I dilly-dallied too long, I might not have the discipline to finish it AT ALL. So I did. And now it is in the hands of beta-readers, an editor, and the cover artist (Gerry Isaac), who sent me this work-in-progress. 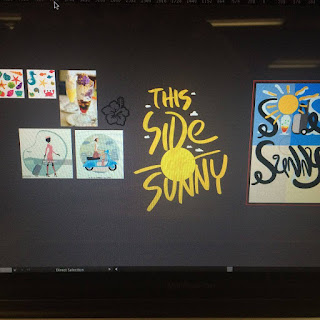 It's the romance-heaviest book I've ever written, featuring a fictitious beach, bulalo, and a half-Filipina, half-American MC. I'm excited about it! And that's always a good thing. :-)

See you soon, This Side of Sunny!
Posted by Agay Llanera at 4:32 AM