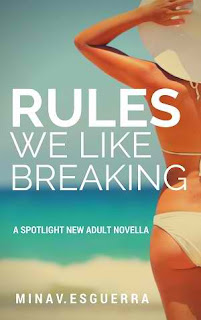 Victoria Bennett is in control and in charge all day every day, but she needs help sometimes.Organizing a romantic proposal weekend for her client in Mexico (she’s never been) would be that time – and the only person available to help her is Nathan Grant, notorious heartbreaker. She knows his past and shouldn’t want him, shouldn’t fall for guys like him, but that hasn’t prevented her from lusting after him for years. It’s just one weekend on the beach, away from people they know, alone with the guy who could cause her perfectly coordinated world to crumble. Shouldn’t be a problem, right?

Reading this book by Mina V. Esguerra is a breeze. It's so short, sexy (and sweet), and nicely paced, that you'll be done reading it before you know it. And that's a good thing 'cause it meant that there was something in it that kept you flipping the pages effortlessly.

I liked the tension between the characters. I thought Nathan was a real gentleman despite his obvious sexual appeal, which Victoria tried so hard to deflect. I like the romantic build up, and as usual, Mina has a way of crafting dialogues that feel and read natural. She doesn't have to say so many words, and go into so much detail to paint a conversation. She leaves some to the viewers to figure out--and this shows just how smart and skilled she is as a writer.

I actually read this right after one of her earliest novellas, Fairy Tale Fail, and I could see how her writing voice has matured, adopting the right tone for the New Adult genre. It was as if Esguerra grew up with characters themselves.

I liked the cover of this one the best (among her Spotlight series) because it's bright and colorful, shot outdoors, and didn't show the usual guy and girl being touchy-feely. And as the cover suggests, this would be a good beach read: light and kilig while you're lounging by the seaside, hearing the waves washing over the shore.