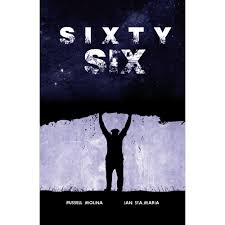 
Reading this graphic novel by Russell Molina and Ian Sta. Maria was a stroll down memory lane. I grew up on my kuyas' Filbar's comic book treasures--my favorites included The 'Nam, Power Man and Iron Fist, The Infinity Gauntlet series, Groo, and of course, Tintin.

But the last time I picked up a comic book was back in high school when I started collecting Asterix and Obelix. Now, reading Sixty Six makes me want to get into the joy of reading this genre again.

The illustrations were very spot-on and cinematic, hitting me at gut-level, while the dialogues were crisp and very Filipino. I laughed out loud so many times, though comedy was just a side dish of this visual feast. It had everything--love, action, comedy, drama, and even, kababalaghan.

My favorite part about Sixty Six is that it chose to have a senior citizen as a main character. There's so much focus in our culture (and commercial literature) on the young, and I thought Mang Tino was a refreshing hero. He reminded me of my dad, of my future self--when it's my turn to hand over that senior citizen ID to get my discount in supermarkets and restos.

Now, excuse me while I lend this gem of a book to my 16-year-old nephew, who aspires to make a graphic novel of his own.
Posted by Agay Llanera at 12:55 AM