My feels from the Feels for Sale

I went to the MIBF on the first day, my only free day to go the event, for a few hours in the morning. I had to leave right away after lunch because Quezon City felt like a separate province from Pasay, and I didn't want to contend with the late afternoon traffic.

In the few hours I spent there, I was again reminded why I write, and why I have chosen to continue to write. 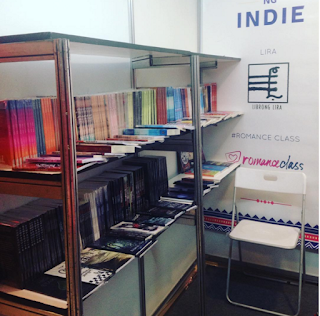 We care about each other.

The first stall that greeted me when I entered the venue was the huge NBS setup, and right beside it was (surprise, surprise) . . . the #romanceclass booth manned by Six (A Beginner's Guide: Love and Other Chemical Reactions) and Pach (The Bye-Bye Bouquet). Six welcomed me with a hug and Pach immediately offered me her seat, and I just thought how nice it was to be part of writing community made up of nice people. These two writers have landed book deals with one of the country's biggest publishing companies, and I'm so very proud of them for doing what they do.

Later on, I saw Tara (Paper Planes Back Home), ever smiling and supportive of other authors. I watched her in action as she patiently explained the plot of another author's book (Jay's Songs of Our Breakup) to a customer, who eventually bought said book. Tara's own book was sold out on the first day, and I think that this has a lot to do, not only with her writing skills, but also her positive aura. It makes people want to read her stories because if they're as likeable as the author, then they're must-buys! 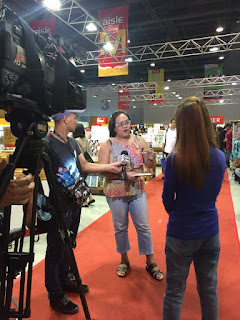 Gette (Classified) was also there from Dumaguete to make chika to customers and write out the receipts. Later on, she was interviewed by a news program, and I think she put it best when she said that what makes romance sell is the desire for a "happy ever after." April (binibini.net), book blogger extraordinaire and #romanceclass' all-around PR person was also there to cheer everyone on. I bumped into Chrissie (The Kitchen When It Sizzles), one of my first ever friends in #romanceclass, who was with her family.

All these people created an atmosphere of fun, passion and positivity that made people want to linger in the booth.

People actually read our books!
I do wonder sometimes if people actually read my work since my books' Amazon pages aren't exactly overflowing with ratings. But there is a silent force out there, moving stealthily among bookstore aisles, tweets, blogs, and FB posts, looking for the next kilig read. And they care that you're working on your next book. They care about the characters you've created. They care about supporting indie writers. These people matter, even if we don't know them, even if they don't make themselves known. 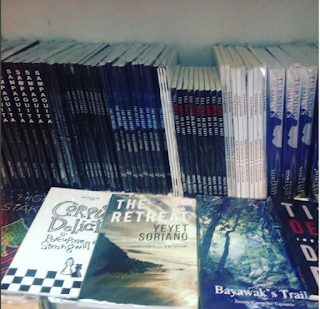 For every book you create, there's a market out there that's just waiting to be tapped. When someone from the UP Diliman faculty approached us, wanting to buy ALL the titles (one of each) in the #romanceclass catalogue, our jaws dropped. Someone wanted our books in the UP Library! And that person was pleasantly surprised to find out that #romanceclass didn't just sell romance--we also offered fantasy, mystery, crime, and YA fare that will be read soon by college students of our country's premier university!

We're all in this together.
Personally, I write to escape. If I just went through the routines of being a mother, employee, wife, daughter, sister, and other roles that I play, life would still be pretty much okay. But there's always that elusive something we long for--that extra spice, that extra kick to keep us going day after day. And I'm blessed to discover that my poison of choice is writing.

The readers who pick up our books, I'm sure, are also doing so to make their lives richer, more exciting. We all need our own private sanctuaries to retreat into. A happy, sacred place that no one else can touch. It's almost a spiritual thing, to give yourself wholly (in moments) to something outside yourself. To immerse in something that feeds your soul and makes it easier to go through life's not-so-smooth patches.

In all corners of the MIBF, I felt that sense of magic of being with kindred spirits. We were all paying tribute to the wonders of the written word, unabashedly waxing poetic over hoarded books that speak of love, life, death and everything in between. It's a world we can't fully understand, but are all very grateful for.

So to everyone who's with us on this journey, and to Mina, who sparked the whole thing and continues to spark other things, THANK YOU. THANK YOU VERY MUCH. Thank you for teaching us to make room for joy in our lives. 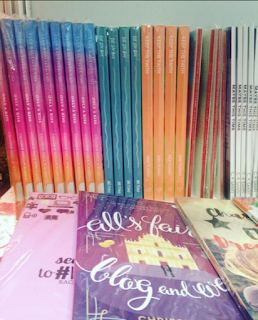