The Children's Book Illustrator I Want to Date 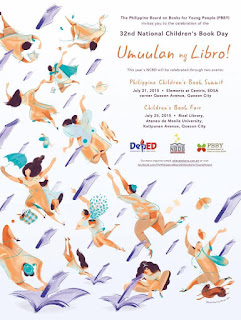 I'm celebrating National Children's Book Day with this somewhat unconventional question:
Which children's book writer or illustrator would you like to date for a day?

Well, I'm going to cheat a bit because the person I would like to spend a day with is a good friend of mine, who happens to be one of the founding members of INK (Ilustrador ng Kabataan). 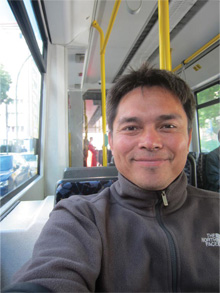 He illustrated "Chief Flower Girl" by Marivi Soliven-Blanco, a children's book released in 1998. I trawled the net but I couldn't find the book cover. But if you're curious about his work, just click on his website or enter any Papemelroti store, which houses his designs, along with his sisters'.

Robert and I bonded when we worked in the children's show, Art is-Kool, which aired on GMA 7 from 2003-2004. It may have been a short-lived show, but it was highly successful. I remember helping organize our free art workshops in the mall, and there would be this DELUGE of participants which we weren't prepared for. We also got a lot of fan mail, and the ratings weren't bad for a morning show. 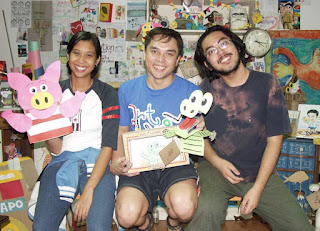 (me, Kuya Robert, and Aldrin)

Including Robert (and excluding the camera crew), our production team consisted of three. While Robert brainstormed his weekly projects (sometimes, minutes before we filmed), my colleague (first it was Marj then it was Aldrin) and I wrote on-the-spot spiels, directed the shots, edited the episode, and helped the network with marketing (Art is-Kool was produced by Probe Productions, Inc., an independent production company) week after week. It was exhausting work--one that people inevitably bonded over.

Now, Robert is constantly busy, and I would very much like to chat with him again. Aside from being one of the most talented people I know, he is also one of the nicest. I think the reason why Art is-Kool was a success was that Robert genuinely loved kids, and recognized the artist in everyone. He insisted on using recycled materials--none of those fancy-shmancy art materials NOT every kid could afford. From these simple things, he created coin banks, puppets, toy cars and other beautiful objects, which I think, are reflections of his kind heart.

So Robert, if you're reading this, mag-date naman tayo!